In the great film, “Oh Brother, Where Art Thou?” one of the characters George Clooney and his prison-escapee buddies encounter along the way is the notorious bank robber George “Babyface” Nelson. And in the film, he really REALLY hates being called “Babyface.”

Not sure why that is — although if you’re acting alongside George Clooney (who gives handsome lessons) it’s easy to see how some insecurity could develop. Nevertheless, the absolute loathing of this character to being called “Babyface” is just one more sign, along with the indiscriminate use of a machine gun, that he’s a real psycho.

After all, what’s not to love about a babyface?

There’s a pro basketball player named Glenn Davis whose nickname is “Big Baby” and I’ve never heard that he minds. That’s likely because although he appears to be rather soft, he’s actually not. Maybe (baby) the nickname lulls people to sleep, so that when he rises and dunks over them, or out-hustles them for a loose ball, or sets a pick and they crash into him and he doesn’t move (or notice) the element of surprise helps him.

I’ve been thinking lately about babyfaces. I see one in the rear-view mirror fairly often — our two-year-old “foster grandson” who along with his mom is living with us now. He’s a sweet, beautiful boy and it’s fascinating to watch the emotions that flicker across his tiny features.

Most of the time he’s happy — from utter, uncontrollable delight at a toy to the quiet enjoyment of a book (although quiet is rare). And like any two-year-old, when he’s sad, he’s extremely sad — my-world-is-coming-to-an-end sad.

Most interesting, though, is the story on his face as his mom gets out of the car every morning to go to school. She opens the back door to get her backpack, then says, “Goodbye, mi amor!” and reaches down to kiss him and receive his kiss. There are multiple variations on this theme, but generally I see:

— the round-eyed, O-mouthed shock as he realizes Mommy is leaving;

— the longing for that kiss, that goodbye, that final contact;

— the love that’s there;

— the sadness as she says, in Spanish, “Behave well!” and pulls away;

— then the one that really gets me, as the brave little soldier sighs, steels himself, and looks forward.

I’m sure there’s research on this (which I haven’t consulted) but I think babies’ emotions mature before the rest of them. No, they can’t control all those muscles and bodily functions yet, and they have a hard time speaking, and calligraphy and raquetball are out of the question, but emotional responses? They’re good at this.

It’s only as we age that we learn to control emotions, right? It’s only as we get older that we grow stone-faced, hiding what’s inside so that those who look at us have no clue how we’re suffering, how joyful we really are, the turmoil or dilemma we’re facing. We work hard to conceal what babies reveal.

And don’t we measure actors’ greatness by how well they learn to command and control those emotions and the facial expressions that convey them? Don’t great actors spend their lives re-learning what babies know?

Now, in addition to my two-year-old buddy, I have a nearly-seven-week-old grandson who has brought the lesson home in even more clarity. My son-in-law and daughter, the parents/official photographers for this lad, sent us a series of four photos when he was scarcely a month old — four different faces where he seems to be thinking: 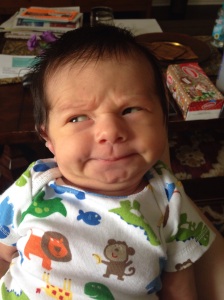 “Dude! I should have bet the farm on American Pharoah to win the Triple Crown! I could have paid for college, right there!”

“Whoa! I should have stopped after that third bottle last night! My head!”

“What do you mean the legislature approved a sales tax holiday for guns and ammo? Are they nuts?” 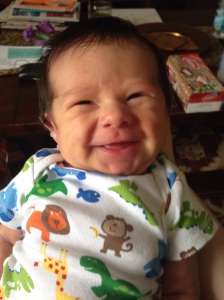 “Ba-ha-ha-ha! That’s a good one about Hillary! I had not heard that one! Hilarious!”

I’ve only shown these to a few hundred close friends, passing acquaintances and strangers in waiting rooms. Now, of course, millions can see them on this blog — but for those of you who don’t read this, I’ll still be happy to show them to you in person, if we happen to be next to each other in the ticket line at a theater, in the same section at a ballgame, or beside each other at a stoplight. It won’t take long.

Like the weather, babyfaces change constantly. But they bring a lot more sunshine.