Sweated, mostly, until last week. Then I spent an unexpectedly amazing week in Costa Rica.

Unexpected, because the country was just so much more beautiful — and beautiful in different ways — than I had imagined. Our son-in-law is from there, and of course he encouraged us to see it (he planned the trip, found us a place to stay and rented a van to drive us around and show us the sights) but although he’s really good at many things, bragging is not one of them. A knowing, “You’ll like it!” was the most we usually got from him. I guess he just hasn’t been in Texas long enough. We’re working on his bragging skills. (A new baby boy helps.)

My daughter, his wife, has of course been several times, and our younger daughter also visited a couple of years ago. They were both effusive in their praise of Costa Rica’s lush beauty and rich variety. I believed them, but for some reason, for this trip, I did no advance research, built no huge expectations. The summer had been so numbingly busy and hot, I guess I just didn’t have time for the thrill of anticipation. That’s a shame, because Costa Rica is the stuff that dreams are made of.

The amazing part was that it brought our entire family together for a vacation, and that snuck delightfully up on me. It was something that hadn’t happened for years and that I had thought might never happen again. The girls are grown, and our son, a college senior, had to finagle a week off from a National Parks Service internship in New Mexico. But this was our grandson’s first trip to his dad’s homeland, his first chance to meet his aunts and uncle, great-grandparents and a host of other relatives. We had a chance to go, everybody cleared the decks, and we went.

Now I’m the one who sounds like the Costa Rica Tourist Bureau. You’ve got to go.

We started with a national park called Manuel Antonio, where you walk about a mile through a tunnel of huge trees in a dense rain forest to get to the beach. Along the way, you can observe monkeys and sloths in the trees, various lizards, birds and colorful, exotic plant life. A huge, iridescent blue butterfly soared above to escort us as we entered, and it got better from there. The blue Pacific caresses a perfect horseshoe of a beach, sheltered in a cove surrounded by hills. Surfer-bait waves crash on rocks offshore, sending spray high into the cool ocean air. It reminded me of Hawaii.

On the way there, we crossed densely forested canyons with whitewater rivers in the bottom of them. On one bridge you can park, walk out, look down and see crocodiles parallel parked on a sandbar. Before the week was out, we saw pristine cloud forests, walked through the fog on the lava flow of a volcano at 10,000 feet, zip-lined for a mile 100 feet above the forest canopy, dined in elegance in a city of 2 million people, toured a coffee plantation, and more. 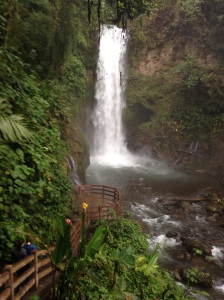 But the most amazing sight, saved for the next-to-last day, was La Paz Waterfall Gardens, a private 70-acre mountain reserve that features walking paths through lush greenery, a vast aviary where you can hold a toucan and talk to huge, colorful parrots (they say, “Hola!”). There are orchid, frog, hummingbird, snake and butterfly exhibits and a big-cat habitat where through the glass you can go nose-to-nose with rescued mountain lions, cougars, panthers and ocelots. There’s also a wonderful restaurant.

But the whole thing is built around a descending chain of waterfalls — the Temple, White Magic, Encantada, Escondida and La Paz. When we saw the first one (the Temple) I said to myself that that was the most beautiful spot I had ever stood in. The others trumped that, cataracts of pure water tumbling over round rocks the size of school buses as they emerge in endless abundance from the mountain. The big one, White Magic (Magia Blanca) cascades 120 feet into a deep pool, putting out a fine spray that keeps everything and everyone nearby eternally soaked. The path takes you to overlooks at several levels and on both sides, through huge ferns, brilliant flowers, plants with leaves the size of a table. All the paths are thick with moss and wet with spray. If the views don’t take your breath away, the climb will.

My son-in-law pointed out that one of the waterfalls, Escondida (it means “hidden”), was not there a few years ago. It’s tucked away behind Encantada, and carries another branch of the river back into the mainstream. It was created a couple of years earlier by an earthquake. He said the river flowed brown and muddy for days, bringing down trees and rocks until it returned to its pristine, clear flow. A bridge at the bottom was destroyed — the steel temporary bridge is still in place — and quite a few buildings sustained damage. Gawking at a waterfall created that recently, trying to imagine the force unleashed there, is awesome and humbling. La Paz was easily the most breathtaking of all the breathtaking sights we saw in Costa Rica.

Even more wonderful than the sights, the food and the natural beauty, however, was the joy of just being with my family, seeing my wife, my kids and my grandson every day, and partaking of the gracious hospitality of my son-in-law’s family. We had already gotten to know his mom and siblings, who came for the wedding, but this time we got to meet aunts and uncles, cousins and grandparents. Our daughter celebrated her 31st birthday in her husband’s homeland, a day after our grandson turned four months old. He happily endured an endless stream of kisses from his aunts and his dad’s kin and went almost everywhere we did, riding comfortably in a harness on his dad’s chest. I observed that Costa Rican culture, like ours, has “baby voice” — that tone people take when they talk to an infant. I have it, my wife has it, and it turns out our Costa Rican family has it, too. There are no cultural or language barrriers: everyone is silly over babies.

It was an amazing, life-changing vacation, but visiting Costa Rica placed a burden on me, too. Now I love people there. I can’t just shrug off bad news anymore. I will never again read of a volcano eruption or earthquake there without wondering how it is affecting my people, my friends, my family — people of Costa Rica whose faces and names are vividly real to me now, anchored in a place I know, a place I’ve been. Before, I didn’t have that burden, but now I do.

But the richness of knowing them, knowing that place, is worth it. I hope to return to Costa Rica often, to kayak in a clear, cool river or backpack into the wildness, but also to taste Abuela’s arroz con pollo, sit and visit with Abuelo and play with the kids and grandkids, nieces and nephews yet to come. I want to savor museums and libraries and churches, to sit in parks and sip coffee, to buy fruit and sit and peel it and feed pieces to the little ones.

I’ve never had a second country, but now I do. It’s Costa Rica. I’ve got family there.

One thought on “What I did this summer…”